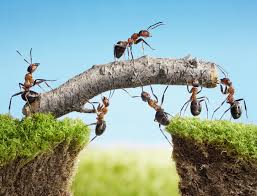 Problem solving exercises. A large majority of team building exercises fall under this category. As its name suggests, such exercises usually present a problem to the team, and require them to think of a solution. As the situations presented by these problems tend to be hypothetical and out of the ordinary, for example “How do you remove water from a cup without touching the cup, and only using paperclips?” such exercises encourage the creativity, and hone the team’s ability to analyse a situation and think critically.

Planning exercises. A logical progression from problem solving exercises, such exercises highlight the importance of planning and preparing for unexpected setbacks. For instance, a team may be asked to brainstorm and generate ideas to create a list of actions they need to undertake in order to complete a task.

A task might seem very complex if everyone in the group disperses and works individually. However, if broken down, and each person is assigned a specific section, what seems impossible becomes much more manageable. Planning exercises help teams to realise this, and simultaneously trains their foresight as they have to consider and predict possible pitfalls they may encounter.

Adaptability exercises. Things rarely go according to plan (think Murphy’s Law). However, what happens when such a situation arises can determine the success or failure of a team. Often, when things fall apart, people grow excessively stressed, and are overcome by overpowering rage and frustration. This impacts the team negatively, as the team breaks down, and breaks out into a series of conflicts. Adaptability exercises attempt to stop this from happening, and are therefore an integral aspect of team building.

The simplest method to conduct such an exercise is to throw the team an unexpected challenge when in the midst of another exercise. For instance, in the abovementioned one about removing water from a cup without touching it, teams may be told midway that the cup suddenly has a hole, and they must find a way to stop the hole. Such exercises not only train teams’ ability to keep calm and work under pressure, they encourage teams to think outside the box, and also develop their resourcefulness.

Trust exercises. “United we stand, divided we fall.” Nowhere is this truer than in a team. A team whose members do not trust each other will often break into fights. Its collapse is inevitable, and projects will end in failure. The most well-known and commonly employed trust building exercise is the Fall and Catch, where one person is instructed to fall backwards, and another is stationed behind the first, who has to catch him before he has the chance to injure himself.

The exercises mentioned in this article are also the most basic of exercises employed in team building. For more information about team building, contact us, at 66514624 or email us at info@jambarteambuilding.com.