On 13th February 2014, the Nordea team successfully completed the Wild Goat’s Challenge on the sunny island of Sentosa, Singapore. The Wild Goat’s Challenge – one of Jambar’s most coveted interactive games on offer, requires participants to answer a series of questions and tasks given through a tablet that they must complete within a time period.

Although small in numbers, the Nordea team more than made up for it when they arrived with an open-mind, an eagerness to have fun and willingness to strengthen company bonds.

It was really fantastic to see that throughout the initial icebreaker game of  Untangle the Nordea team seemed already to be at ease and very comfortable around one another. Although they were unable to successfully complete the game, it did not dampen their spirits and in fact the team continued to share inside jokes about some sticky situations they were putting themselves in during the game.

Following the game of Untangle, the teams were split in to two teams. The teams were then given the safety and game briefing by Jambar’s Kristle Ng. The teams were based around Beach Station for the first few minutes answering questions such as: what is the most recycled material in the world? Or, how many litres of blood does the average adult have?

Following this, teams were asked to make their way to Resorts World Sentosa via monorail during which they continued to perform challenges such as juggling water bottles. Upon arriving at Resorts World teams were actively trying to complete challenges and questions around the area, such as two members of the group performing a handstand whilst someone else takes a picture.

One of the highlights of this event was the acting scene which teams participated in towards the end of the game. The scene which teams performed was a clip from the 1986 film “Crocodile Dundee” where teams enacted a robbery scene. What made this challenge so interesting is that participants were forced to integrate their own props and personality into the given script.

At this point, time became the major aspect of the game where teams were forced to strategise in order to answer and complete as many of the remaining challenges and questions, and to ensure they returned to the finish point in the time stipulated by organizers during the briefing.

After both teams successfully completed the Wild Goat’s Challenge, teams were then asked to present some of the self-portraits and haiku poems that they had created during the challenge. These presentations provided lots of laughter and a real sense of cohesiveness between all team members involved. Following this Kristle delivered the debriefing to the Nordea team who then followed up the team building event with a company dinner at Quayside Isle. 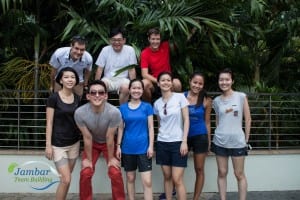