It was a sunny and breezy morning, employees were gathered and hyped up for fun and exhilarating outdoor challenges of Beach Olympics. They were distributed into seven teams in total and Beach Olympics kicked-off with a simple warm-up activity, “Knot City”. Employees in their respective teams formed ‘knots’ with each other using their hands. They would then attempt to untangle these ‘knots’ without releasing their hands.

Another one of the exciting activities planned in this segment which tested their physical strength and team spirit would be “The Wheel Barrow”. In pairs; one would be in a push-up position and the other one holds his/ her legs for support. Both of them would then head out to collect an apple with their mouths in a bucket of water and eat it before heading back. After a vigorous set of Beach Olympics outdoor activities for about two hours, the employees had a wonderful time and were ready for the next set of indoor team building activities in the afternoon. 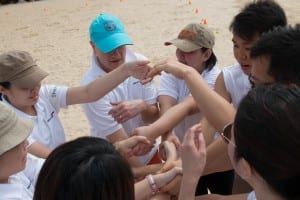 After a scrumptious buffet lunch, the next part of day’s activity was held in one of the ballrooms at Rasa Sentosa Resort. After wrapping up the morning segment with a slide-show of pictures and medal presentation to the winning teams of Beach Olympics, teams were briefed about the Creative Putting Challenge. The goal of the challenge is for each team to design a structure of a putting golf hole with a list of materials provided. The added difficulty of the challenge was for teams to follow a set of guidelines in the creation process such as including moving parts, ‘the invisible ball’ and an elevated structure from the ground for about 30 cm. Teams had to also choose a theme for their golf hole design which is famous world landmarks. Some of the magnificent putting golf hole were built according to structures like The Great Wall of China, Marina Bay Sands, The Golden Gate Bridge and The Leaning Tower of Pisa. After creating and building these golf holes, employees had a chance to test the playability of their golf holes and practise their golf skills as well. 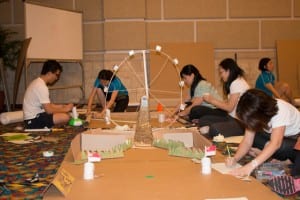 Employees headed to a nice BBQ Dinner where everyone had the chance to unwind from the long day and connect with each other on a more casual note. It was also then that Jambar Team Building received feedback from about the day. Employees from this Singapore branch of the world’s leading chemical distribution company had a great time participating in Beach Olympics and the Creative Putting Challenge! The activities were fun, appealing and stimulating. It was a day well spent getting to know their co-workers better and participating in refreshing team building activities.