Jambar Team Building is pleased to congratulate the Civil Aviation Authority of Singapore on their successful completion of the Creative Putting Challenge.

Friday, 7th February 2014, at the Changi Airport Recreation Club— Jambar Team Building, Singapore’s premiere team building consultants, has a panoply of programmes available, all designed to satisfy a client’s team building needs. One of these is the Creative Putting Challenge. A programme where participants get to design and build their very own mini-golf course, the Creative Putting Challenge is an exciting team building game which tests the creativity of participants while facilitating the formation of bonds and establishment of rapport.

The Civil Aviation Authority of Singapore (CAAS) had the opportunity to experience the Creative Putting Challenge first-hand, in a team building event which began with a short session of Untangle, an ice-breaking game where team members unravel themselves from a knot of arms and hands.

Following the game of Untangle and a preparatory brief by Jambar’s James Mclauchlan for the ensuing activities, the event continued with the commencement of the Creative Putting Challenge. Teams were given precisely two hours to design and build their mini-golf course, each modelled after world-renowned structures such as the pyramids of Giza. Cardboard and Polyvinyl chloride pipes forming the core of materials provided for them to construct their miniatures, participants had to venture beyond their comfort zones to think of ways to turn the rectangular sheets and cylindrical tubes into a viable course. Further given obstacles in the form of restrictions such as having to elevate a section of the course above thirty centimetres; and impromptu challenges such as having to build a putter given only the shaft, participants displayed their ingenuity and overcame every hurdle. For instance, one team used a plastic bottle to construct the putter head, while another used a stick of glue.

After two hours of mental and physical stimulation, the teams were given a breather in the adjoining room where there were snacks and drinks laid out for their consumption. Having been revitalised with tea and coffee, the event resumed with teams being given the opportunity to play at each other’s courses. Perhaps the most exciting part of the event, participants roamed from course to course testing out their friends’ creations. Imagine the sense of achievement when participants managed to score holes-in-one, even though it was at a Par 1 course.

The day concluded with a video montage created and compiled by Jambar Team Building, giving participants the chance to recollect and reflect on the day’s events; and a prize presentation ceremony where the teams with the best mini-golf courses were rewarded for their efforts. By the looks of satisfaction and happiness that participants were wearing by the end of the event, amid the raucous and lively laughter, it was clear that Jambar’s Creative Putting Challenge had been a resounding success. 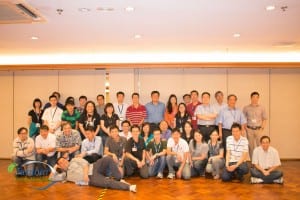