On Thursday 28th November, a total of 72 employees were gathered and hyped up for an afternoon of fun-filled collaborative activities in Sentosa with Jambar Team Building.

The event started out with “The Running Man” challenge. Sounds familiar? Jambar Team Building adapted the challenge from the popular Korean television show for our clients to experience this new game show sensation. In teams they were given a series of mini activities to complete within a time limit at different locations; some similar to the television show. For instance, “Public Charades” where teams tested their team compatibility when some of them acted out a list of movie titles for the rest to guess. There was also “Public Skipping” where teams had a chance to experience intense physical coordination. They had two tasks; the first was to complete 10 consecutive skips as an individual team followed by the second which was to combine skip with another team so that they could earn bonus points. 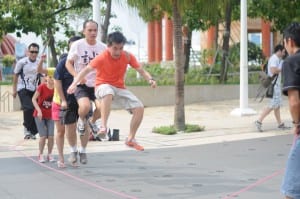 The next half of the afternoon had a different agenda. “Beach Olympics” is definitely a favourite for Jambar Team Building’s clients. Teams headed to the beach and carried out a variety of interactive games. They played the “Flag Game” where team members are paired up, with one member in the pair blind-folded. And then the other member has to guide the blind-folded member to collect flags laid out on the beach. Another challenge that teams played was “Pass the Fruit Loops”. This activity once again challenged team member’s physical coordination, specifically their ‘lips’ and tested their patience. Team members lined up in a straight line and were given satay sticks placed in their mouth to pass the fruit loops. The team which is able to pass the most fruit loops from one end of the line to the other wins the challenge! 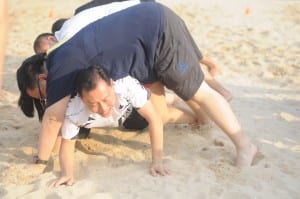 It was a long afternoon for these employees. But they showcased great enthusiasm and competitive team spirit throughout the entire afternoon! Before the day came to an end, they had a nice dinner at Mambo. Jambar Team Building debriefed the main team building challenges and the evening went on with casual conversations amongst the employees highlighting the afternoon’s activity.